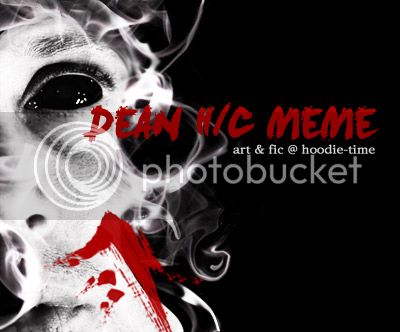 If you'd like to advertise this on your own journal, here's some nifty code:

Or, if you'd like to use a slightly smaller version of the banner (I couldn't decide which one worked better):

While we're at it, here is a banner outtake! Which I then just turned into 9x23 fan art:

Artist's Commentary: Dude, you need to update your Photoshop repertoire. For one, it's Photoshop CS. And red & black? Liquid grunge? It's the greatest hits of early 2000s graphic design!

# 1x17 "Hell House"! The episode that started it all! Or...failed to, as it were. XP This is the first episode of SPN I ever watched, because an old friend made me, because she really loved this "Supernatural" show and omg, I would so love it, too. I, uh, did not.

Which is hilarious in retrospect, because I adore every bit of 1x17 now, and it's one of my most frequently rewatched episodes! When I didn't fall in love with it in 2006, I think the reason I gave myself was because the show seemed to lack GRAVITAS SUFFICIENT TO HOLD MY INTEREST.

# I wonder how many times Sam's used that strategy--that is, his coercive performance of... well, something, which somehow manages to 1) cue Dean into playing along almost seamlessly, and 2) immediately turn its subjects against their better judgments. And I wonder whom Sam tried it out on first. I'll bet that he never once dreamed that he'd be able to pull the same simple stunt in a context that would give it the power not only to obviate the need for torture, but also put him and his brother back on the same page for a few precious, hard-won minutes (9x21 "King of the Damned").

I'm both fascinated and devastated by the idea of being able to carve out these moments of solidarity/security with each other, but only by virtue of manipulating a third party into a false reality, in which they perform an act--and in this burlesque, they are brothers.
Collapse