ANOTHER SEASON, ANOTHER EXCELLENT OPPORTUNITY FOR SUPPORTING CAST MEMBERS, ONE-OFFS, and INSIGNIFICANT RANDOM PEOPLE OF SPN!

Pipe dream though it may be, I would make a deal at the crossroads to see Anna Akana on SPN. She's done some film/TV acting, though she's most popular as a YouTube artist and vlogger; and this year she's in the process of producing a series of excellent shorts. 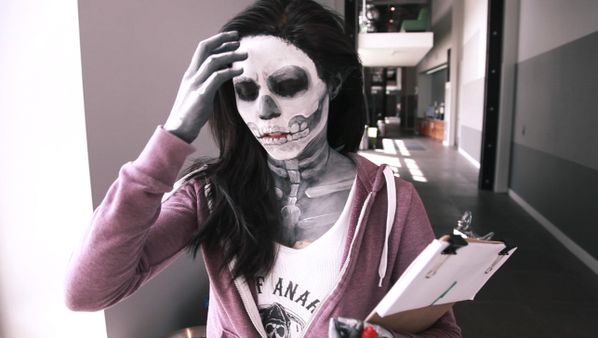 She can do comedy and she can do dark drama, and she's a huge, major epic genre girl at heart. Plus I feel like her presence on social media would lend itself well to welcoming her into the SPN family. :P I've written here before about how huge a fan I am of her honesty and her self-reflection, but the girl writes (and directs and produces) a mean horror story, so now all I can think about is how perfect she'd be for us!!

Here's one of the four short films she's made this year:

Also check out her film "Afflicted, Inc."--where that skeletal BTS pic is from--and her first of this year, "Hallucination."

ANNA AKANA FOR SUPERNATURAL. DEAR POWERS THAT BE, PLEASE AND THANK YOU.

I'd love to see Malese Jow on SPN. She's done CW stuff for The Vampire Diaries and Star-Crossed, which I feel like makes it only reasonable that she come play with us, too. Plus, someone's already made
this convenient black-eyes edit for her. She can be a demon who runs across demon!Dean or something, like a foil for Krissy!

It'd also be cool to get Maggie Lawson, who played Det. Juliet O'Hara on Psych. It just ended, we have a history of cast crossovers with them (woohoo Vancounver-produced show pride!), and Maggie Lawson is, imho, both adorable and also the best dramatic actor in the cast.

Who would you want to see guest star on SPN, and why? Both "this is actually a fairly reasonable choice" and "this is insane/impossible" answers accepted!

EDIT: ALSO, JODIE FOSTER. BECAUSE... Well, I actually just like Jodie Foster. I mean, I've seen Panic Room for god's sake. And you have to really, really like Jodie Foster to get through that whole trainwreck of a movie!
Collapse