For the sake of context, I'll note that this is technically fic-related, but it's just as easily read as a super random post about agave plants. Because really, when aren't agave plants an appropriate share, am I right or am I right?

At my mother's house, there's this giant agave plant. In 2011, it bloomed for the first time in over 20 years, since agave--or at least this kind--only bloom once every 20-30 years. It totally blew all our minds, and I had the pleasure of seeing it in person when I went to visit. I had a moment of real sadness when I later received a text message saying it had finally toppled over. :(

But ever since, I've just thought they were the coolest things. 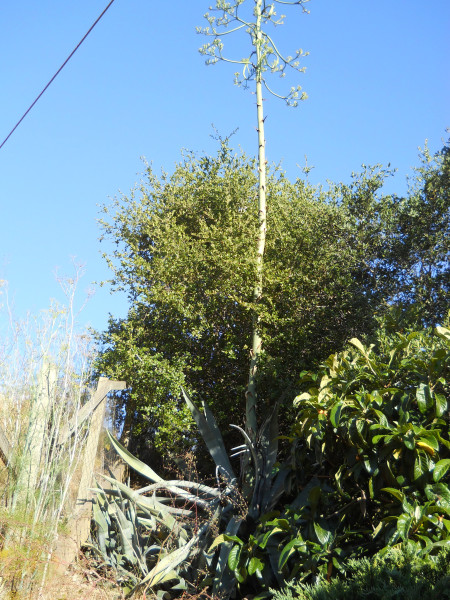 Weirdly, according to the photo album I pulled these from, 2011 was also the summer where my mother had a peacock come to roost on her roof, and when a wild boar charged her car in the canyon and left a big ol' dent in the driver's side door. Good year, that one. XD

And if you read the fic with the agave plants in it, no, they don't actually look that much like dicks. But I have this vague memory of that comparison coming up in conversation at some point in 2011, so I stuck that in there, too. I mean, it's a plant, right. So if an agave plant sprouts a shaft it's literally giving out sex pollen.

I am officially in love with whatever CW intern is in charge of SPN's Facebook page. For the most part I don't bother with SPN on the Internet outside of LJ, and I don't do spoilers/trailers/promo shots/interviews/whatever else SPN's page might have to offer the world. So I figured the official Facebook page would be basically useless to me. HOW WRONG I WAS, THOUGH.

Because I found this:

Which, I don't even know, man. It's just SO funny to me, because aside from the fact that some poor CW employee had to make an official graphic for this, this recipe for Turkey soup (bad titular pun included) has absolutely nothing to do with Supernatural. XD

Like it's not even a sort of tongue-in-cheek, overdetermined or stupidly specific reference to SPN, like turducken sandwiches would be, or tomato rice soup, or PIE--it's literally just a random recipe for turkey soup.

And god, I feel like I'm probably alone in how endearing and entertaining if find this, but as a genre "this has absolutely nothing to do with Supernatural but in my world everything is about Supernatural" is my favoritest of favorites.

If the official SPN Facebook page posted nothing but dubiously designed graphics joining SPN and completely mundane, unrelated things, I'd follow it in a heartbeat.

Okay, so you know that fanmix I made with ridiculous songs I can't help but associate with SPN? Please add Rihanna's "S&M" to the mix. Because it kept coming up this week and THANKS TO CROWLEY I can't help but put the S-A-M in S&M.

Omg, I know, Post #3 for the day again. I promise that for most of December, you will be rid of me. XD But I just read this really evocative 10x07 coda that I wanted to share. It's about 500 words, Sam POV, light Sam/Dean--Lies by

misplaced_ad. Spoilers for the episode, obviously.

It aligns Deans interactions with Cole and also with Sam in a really interesting way, and the emotions in this are so, I dunno, immediate and visceral. It gave me the same flutters of panic that I get when I'm getting ready to watch a new episode, or reeling from its (dis)contents. Everything Sam's feeling here is so palpable.
Collapse