In my family's culture, if you fold one thousand paper cranes, you get a wish. I've made my thousand cranes, and whispered my wish a thousand times. Tomorrow I'll mail them all to my sister, so she can hang them someplace bright and warm and safe. 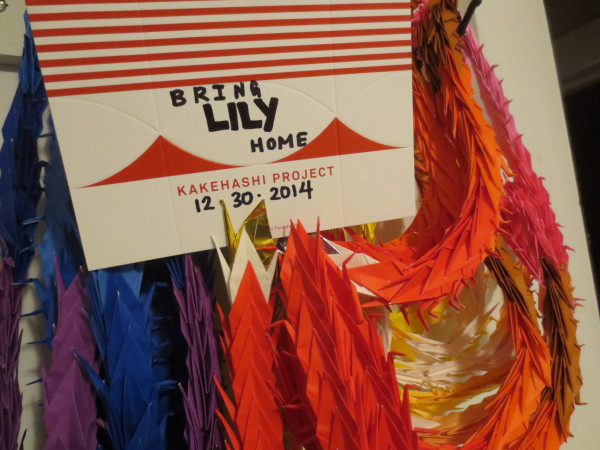 In addition to our hundreds of flyers and quarter sheets, my father also made a big multilingual banner. Lots of people have seen it, and told us via Facebook or when we found them going door to door, or walking the neighborhood, but no one's seen Lily. 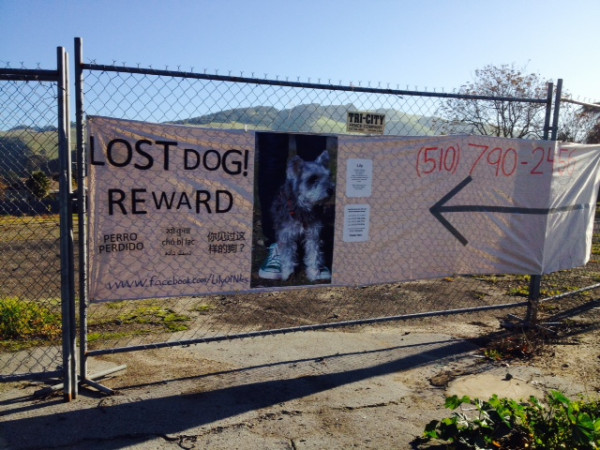 I'm jealous of people who find their dogs in under twelve hours, 800 feet from their home. Of people who found their dogs "far away," a mile or two from home. We've gone miles door to door. We've searched canyons, creekbeds, quarries, far into the hills, park trails, official dog parks, unofficial dog parks, stagecoach staging areas. On foot five, six miles from home. We've followed leads pointing clear across the city. Pet groups, lost pet groups, animal rescue groups, veterinary offices, pet supply stores--all of these things in an ever-increasing spiral outward. We've walked the streets in the cold still night, inciting the barking of dogs just to listen for her voice in someone else's yard. We've kept abreast of every reported dog sighting within a hundred miles that sounds even the slightest bit like her, and some that don't really.

And there are the people you're not quite sure what to do with, like the friend of my mother's who claimed she'd had a psychic vision, a vision that let her know that Lily was somewhere warm and safe.

To back up: I'm not sure what I'm supposed to do with the knowledge that my mother knows a psychic.

But then, my sister's the one who wished on a star. It's my brother who made missing posters in miniature to place in his Lego city--getting the Lego denizens in on the search. I've folded a thousand cranes. When I drove my brother and other sister up to visit my grandmother on New Year's Day--my mother and sister stayed behind to man the phones, keep searching--I surprised her with my insistence on drinking her good luck tea. I drank too quickly, and burned my tongue. I made my sister drink, and my brother, too. (He gagged.) But it was good luck tea, and we did not, do not, have the privilege of walking away from the possibility of fortune.

Even though there's no real reason it should have been "good luck" tea over any other normal kind of tea. Except, perhaps, because it was New Year's, and the tea was from Japan. Kyoto, actually--green tea capital of the world.

I should know. I'm the one who bought it for her.
Collapse