Title: Every Rhyme Without Reason
Writer:

wincestbigbang. The first half of this was graciously alpha-read by

bratfarrar, in spite of all the angst. <3 It was beta-read by

onlythefireborn, both of whose keen eyes and revision feedback has been invaluable! All remaining deficiencies are mine. 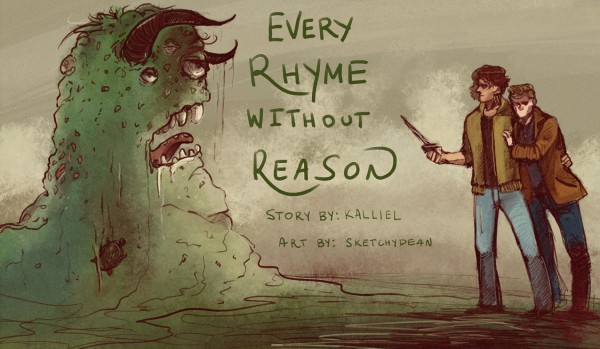 Summary: Still shaky from the events of 1x12 "Faith," Sam and Dean take one too many cases in quick succession and find themselves stranded, with Dean injured and Sam struggling to stand his ground against the insanities of grief, exhaustion, and what seems increasingly like the intractable oblivion of hunting. When a hunter turns up dead at their motel--because of course one does--they find themselves at an uncomfortable crossroads: Just trying to survive the job itself is probably going to kill them before their monster can.

They'll need each other more than ever, but need is a complicated thing; and Sam and Dean are either the best thing for each other or the very worst. It's time to find out which.