I feel like if I were Dean and Castiel and I'd ended up getting tricked into raising and then killing some locked away evil, my go-to wouldn't have been "shit, someone wanted us to get killed by those things!" but "Oh, fucking hell. What seal have we broken now?" XD

I love that Jack thinks so highly of Sam and Dean and is able to draw his own strong moral judgments from what he sees in/of them, and seek goodness through their example. <3333 Even as, as is typical of their lives, Sam and Dean end up sine qua non effecting the torture and pillaging of others. (Even soulless and corrupted by the demon tablet, Donatello was totally right in that Sam and Dean only called him up because he had skills useful to them. TOTALLY CORRECT ASSERTION, MY BRUH. XP Same with Kaia, and at the beginning [and possibly still to some degree?] their smiliest interdimensional can opener.)

There's an endless number of other examples, obviously, but maybe the most relevant one, since the tablets are back in play, and we saw alterverse Kevin serving Michael in a similar role as Donatello to Sam and Dean, is this one:


SAM
What? [DEAN unfolds the note.] What's it say?

DEAN
Uh, that they bolted, that we shouldn't come looking, and since we lost the tablet, Kevin figures we don't need him.

SAM
Yeah, but Crowley still does. What's that kid thinking?!

DEAN
He thinks people I don't need anymore – they end up dead. [x]

I just love that they can inhabit both those roles simultaneously. I don't have any big thematic theses or anything, but I'm interested in the way that both this narrative that Mary making her deal was the Right Thing, or that Sam and Dean Saved the World, is at play right alongside You Break Everything You Touch and Everything Is Terrible. Neither is entirely true, and at least the latter has been very thoroughly explored, but in tandem they make everything just a little bit different. (Sam and Dean's reaction to Castiel's new tack is way different than either of them would have responded to him in S4 when Castiel threatened war, or S6 when Castiel was basically devising it.)

Snagged this meme from Tumblr:
go to your Works page on your AO3 and reblog with the top tags listed in your Additional Tags filter 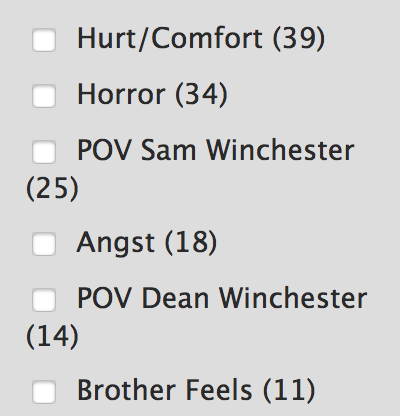 Hm. Apparently I suck at tagging things on AO3, because I have 165 fics on AO3 and I'm pretty sure these tags describe pretty much ALL of them, rather than just ~70 of them.

Still, this is an almost painfully accurate summation of what I write. XD

What are your additional tags???
Collapse