As someone who is, by nature, extremely one-track and monofandom, I just wanna state for the record that ALL THE MEDIA is SO GOOD right now and I don't know what to do with myself. Obviously an embarrassment of riches is the best possible media problem to have, but also like... How do I live??? My poor brain can't take it.

Cars fandom = so good rn (there are exactly two people in this fandom who regularly post fic, lol, AND ONE OF THEM IS ME--but somehow I'm still multiple fics/chapters behind on my reading)

NASCAR = so good rn (last weekend was my favorite race to watch so far this season!) And I say that even though my fave's day ended like: 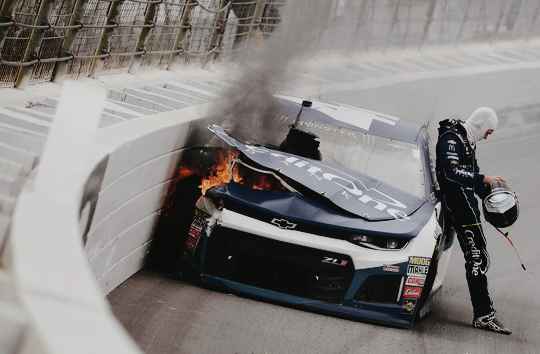 Which is an image that manages to be both heartbreaking and hilarious, because the juxtaposition of someone casually leaning against a car that is very much on fire is quintessential NASCAR, honestly.

Silicon Valley = SO GOOD RN. I rewatch every new ep like three times over the course of the week while I pine for the next

SVU = actually SVU is complete and utter garbage this season, to a genuinely laughable extent, but I ain't mad XD you do you, SVU. Channel your inner daytime drama

SPN pre-S13 = I spent like an hour today rewatching clips from S10 and askfjal;kfja now I just wanna hole up and do nothing but rewatch S9/S10 forever. Unfortunately I don't think that's how life works.

SPN S13 = SO GOOD RN. I have sampled three different copies of 13x18 trying to find the fastest download because I have a deep need to watch [Spoiler (click to open)]Dean wandering around in the snow this very night, even though I have an early and all-day symposium to attend tomorrow and should be asleep

Plus, when I'm writing a fic I have a very difficult time existing effectively outside of the world of the fic, so that fic I keep talking about has basically been derailing my whole life for three months because things like food and exercise and sleep keep taking second seat to it, and I don't really know what to do about that. I keep expecting to eventually finish it, and be released from it, but then I don't, ahaha.

Well, 13x18 is the best thing that has ever happened to me; I loved every bit of that and especially Anthony.

Headcanon: Anthony is also the airplane demon from 1x04.

I guess technically that means there's spoilers for a demon named Anthony but I'm pretty sure 90% of the people who watched the episode didn't catch his name and 99.99% (100%?????) don't care!
Collapse