My memory for S8 is notably poor relative to any other segment of SPN, because most of the eps I've only seen once and most of them I haven't seen since they aired (it was a busy year... I was living in another country, applying to grad school, graduating from college, and moving across the country). But NONE SO POOR AS THIS EPISODE, PERHAPS. I was a full eight minutes in before anything remotely rang a bell, omggg. XP Maybe I'll be proven wrong with some of the upcoming mid-S8 episodes I've yet to get to in the world's most protracted rewatch, but I really think this might take the prize for "episode of SPN I remember the least."

THE ONLY PART I REMEMBER IS LINDA TRAN.

Sam and Dean also had this odd little exchange that hit some slightly unusual notes. Like, Dean walked into the motel room super in his head, because he'd just seen and/or hallucinated Purgatory!Castiel on the side of the road. Sam turns around, notices, is like uhhhh u ok and Dean is like, mm yeah I'm ok. Which isn't a scintillating conversation on its face, sure. But the way Dean replies is like he's actually thinking about it, and his response isn't at all defensive. And Sam is actually satisfied by his answer. Which on both their parts seems fairly atypical--particularly given a mere episode ago, Dean was threatening to shoot Sam and an episode before that Sam learned about Benny. I feel like it's important to know that they do appear to sometimes have honest check-ins with each other (even when not necessarily on their best terms with each other, re: mid-S8) in addition to the "I'm fine."/ "See? Everybody's fine!" variety. <3_<3

I really want to see the rest of this episode-I-definitely-only-remember-like-5-minutes-of but it's bedtime, so. THE REST TOMORROW.

For now, I wanted to share this gem of a screencap I paused on. LOOK HOW CUTE THEY ARE: 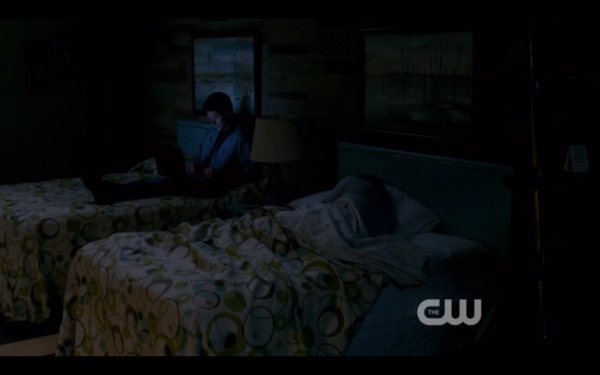 Sam all L-shaped because the beds are so short. And you can tell it's hot because only his legs are under the covers (and Dean immediately took his jacket off when he walked inside, earlier in the scene).

Also, I've been stuck in S8 of this rewatch for literal years, and I started this rewatch in the Hellatus between S9 and S10.

BEFORE S15 STARTS UP.

And then, idk, probably just start over again, and finish sometime in the mid-21st century. XD

Crowley tortured Samandriel and got the names of all the would-be prophets after Kevin (at least, I assume that's what he's doing, based on the episode title).

The first thing one of these kidnapped people asked was, "Are we in a spaceship?"

AND CROWLEY HAD THE AUDACITY TO LOOK SURPRISED. WHEN HE SAT THEM AT A TABLE THAT LOOKS LIKE THIS: 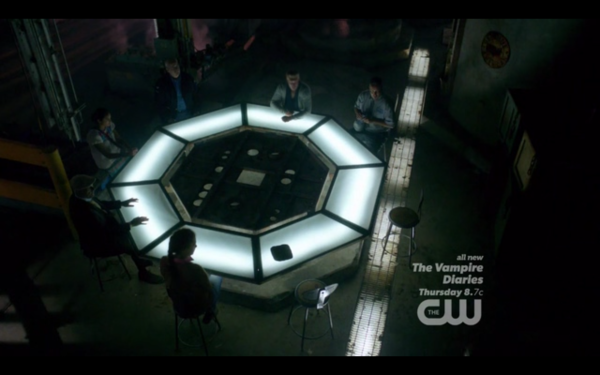 Where did he even find a table like this?!?!?! The Andromeda prop closet?? Stargate: SG-1??

XDDDDDD It is an absolute crime that I've spent the last 7 years not appreciating this episode nearly enough. It has a glow table! (And the most delightful middle-of-the-night Winchester convo, AKA one of my top favorite flavors of Winchester convo, which I'll get to later. The glow table could not wait, however.)
Collapse