There's a motel on the outskirts of my town that just has a neon sign that says "Motel." I finally pulled over to take a pic last night. When I looked up the reviews online, LOL. Seems ideal for when you want to stay at a hotel but there's a 90% chance demons are coming to kill you there. XD 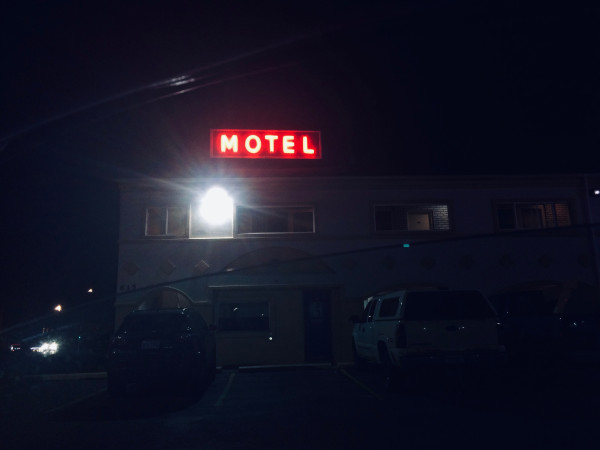 "Sleep in your car first!
This is a local transit type motel. They rent hourly and it's very run down. Not clean and scary. if your unfamiliar with the area this isn't a place to stay. Enjoy Ypsilanti not don't stay here."

"Not a good place
I have never and wouldn't never stay here i live in this area and this hotel is known for its drug traffic, prostitution and is just filthy. It's not in a safe part of town either. I wouldn't even feel safe walking past this place."

"DO NOT STAY HERE.
Not a good or safe motel. I have not stayed here but I live in Ypsilanti. I would not feel safe here. Please choose somewhere else to stay. See my list below. If you read the review from Happy Travels 99999, ask yourself what the ragged-looking man was trying to buy."

Meanwhile, Sam and Dean's review (their TripAdvisor username is "Sarah G" for some reason): "Arrived in the middle of the night. Was quick to get the room. Wifi is not free, but that's okay with me. Four stars."

I was kind of hoping I'd be able to click these eps off pretty quick, marathon them one after the other and just have fun watching, but I keep feeling compelled to stop and obsess over scenes that past!me severely underrated. Because like, when I think about what I was mostly paying attention to when I first watched S8, I think the split was like 70% Amelia, 15% Castiel, 5% Linda Tran, 5% Sam, 3% sudden resurgence of Meg, 2% Dean (in 8x01 and 8x18).

For Dean, I just felt like, mmmm, this man needs some space, so I just sort of gave him the season to do his thing. Which I realize doesn't have much logic to it, because the TV character/TV watcher relationship really doesn't work like that, but it is what it is. XP That's just how I felt, so I sort of. Ignored him for a season.