Last year, I started a tradition of, on my birthday, watching the SPN episodes that aired the day closest to when Sam and Dean would have turned the same age as m--except I immediately fucked this up by not knowing how old Dean is and watching 2x12 last year instead of 1x14. So I'll watch 1x14 this year instead, along with 6x19 for Sam, which I watched just now.

6x19 is "Mommy Dearest," which I felt appropriate to the holiday. IT ALSO HAPPENS TO BE ONE OF MY TOP FAVORITE SPN EPISODES, from the Jefferson Starships to Noir!Cas to the excellent H/C aftermath fics related to consuming phoenix ash and also getting bit by Eve. I just. Adore.

S6 Castiel is one of my favorite Castiels (my other favorite Castiels probably being S4 Cas and S8 Cas, and maybe also S9 Cas) and the death of Eve turning straight into the revelation that Castiel has been machinating far more than he's been letting on, all tee'd up for the finale is just pitch perfect brilliant everything I've ever wanted. My love for 6x19 is directly proportional to my distaste for 6x20.

- Jefferson Starships! That whole scene, from Bobby going with "well, you found them, you get to name them" to Dean's pride in his explanation for why to Sam's quick-but-unamused adoption of the terminology.

- The way Bobby vocalizes his suspicions of Castiel, which Sam definitely agrees with--but he backpedals so hard when he sees Dean's face. Dean is completely open and vulnerable to Castiel's betrayal and it is so, so sad. And Sam doesn't want to be the one to hurt him like that (even if, technically, it's Cas. Was always going to be Cas).

- When they're trying to get Jefferson Starship intel from the first live victim they find, the guy is scared and delirious and dying. He desperately wants them to tell him facts about him, but all the Winchesters want to talk about, obviously, is how he got this way. And Sam just says, without skipping a beat, "The ambulance is coming." Whether or not Sam and Dean care whether they lie to victims or not really depends on the day, but this particular lie was so fluent and like, I dunno. It felt a lot more striking than your standard "it's going to be okay." Somehow the lie feels more egregious when it's specified.

- Look at these gorgeous settings. <33 (Surely I've confessed here at some point that I watched two entire seasons of True Blood just because I loved the set design so much. Don't really care about vampires, didn't care about those characters. BUT THE SET DESIGNS. All that HBO money going to good use.) 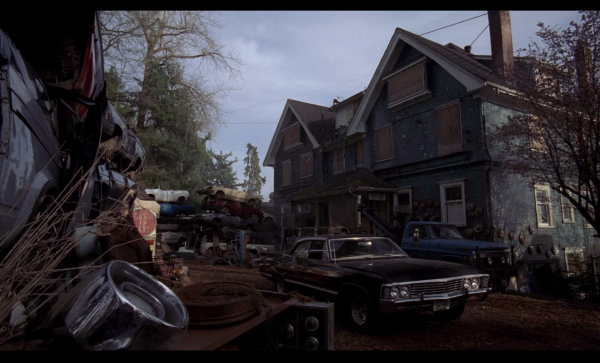 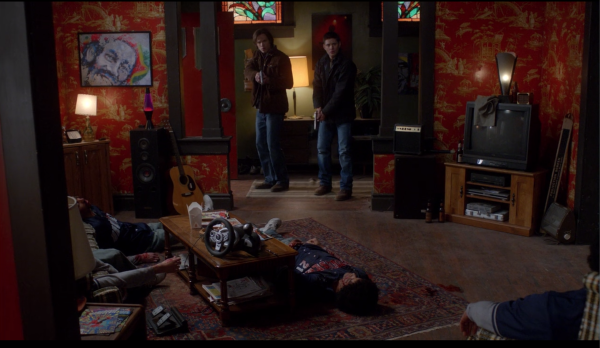 - Noir!Cas! Noir!Cas! Noir!Cas Noir!Cas!!!!!!!! <3_______<3 "Disapproves of Sam and Dean halting in the middle of trying to find Eve, after painstakingly tracking her down in ways that absolutely cannot be replicated ever again, should Eve choose to leave this place, just to drive two random kids 15 miles one-way to be with their uncle" Cas. "Right, I shouldn't be reproaching Sam and Dean's 'crippling and dangerous empathetic response with ~sarcasm~” Cas. "Standing in body-strewn diner as off-camera Crowley puts a nickel in the jukebox and a shaky low-angle camera stalks through the bodies toward Cas" Cas!!!!

- This episode is also home to one of my favorite 5-second segments of all of SPN, nearly on a par with my favorite one-liner ("salt being a spirit deterrent"): That one time Sam and Dean burst through a door so hard it swung back and Dean had to hit it out of the way again. IDK MAN I'M JUST.

- Also, this is probably very obvious, but I admittedly do not pay a whole lot of attention to SPN's lore surrounding Heaven and the cosmos and souls, but apparently monsters have souls. Like, obviously they had some kind of essence that when they died went to Purgatory, but I'm 100% certain I'd forgotten that that essence was a soul soul--like, equal exchange rate with a human soul kind of soul. And the whole reason Eve was taking any action on Earth at all was because Crowley was harvesting monster souls when his purview was supposed to be only human ones. (Because Crowley, because Castiel, because Heaven, because Purgatory, etc. etc. etc.)

Because I'd wondered, like, with the raising of the dead from Hell at the end of S14, was it just ghosts who'd died and gone to Hell? People who'd died and gone to Hell? (Bela? ELLLIE??????) But I guess if every monster Crowley killed over the course of S6, including the Hellatus year, ended up being suckered into hanging out in Hell instead of Purgatory, then there's potentially a lot more variety coming up out of the ground about now. Hmmm...
Collapse