I say "writing" as though I've touched the doc in a week, which I haven't, but I decided to write my Bleach fic, since I apparently wrote one last time around. I've been writing it in the Notes app, because I thought it was going to be a short vignette, but it turns out it's at least 3.5k and will probably be around 5k once I'm done. But now I'm like, at that point where I need to decide what I want out of it--because like, right now it's one of those fics that's basically a collection of missing scenes that highlight a narrative strain I believe already exists in the canon, but perhaps is better elucidated in print than on screen. Which is all well and good--or at least, I clearly believe this, because that's 95% of what I write for SPN. But even in SPN, where I know I'll always just write more, I get to that point where I feel like that's not enough and I need to do something with an actual story in order to express like, the full range of my feelings about a series and the extent to which I want to interact with it.

There is not world enough nor time to be doing all that with Bleach, because 1) some idiot has not finished their Summergen yet and you can only take so many extensions, and 2) we're going to finish Bleach soon and move onto another anime, and while we'll probably still be mentally in Bleach land because BLEAAACH my small brain does not have room for more than one fandom at a time, and balancing latent SPN, flashbomb Bleach, and this trainwreck of a NASCAR season is already too much to handle.

So I'm like, if I'm going to write this fic and it's going to be the one thing I write for Bleach, I better make sure I push it to where I really want it to go, so I don't disappoint myself/underutilize the outlet. Not that I'd go for anything terribly ambitious or inventive, even at my most ambitious here. I don't want to write an epic, or even take the characters much further than they go in canon. But I do want to capture them; and I do want to crystallize certain a certain theme that goes largely unspoken in canon. Problem is, doing that is more effortful than just spooling out missing scene vignettes so instead of doing that I'm just lying on the ground doomstaring at my carpet, mostly. XP

My thinking is, maybe if I step back to take stock of the things I've enjoyed playing with so far, I'll be able to gear up and make the next jump so I can finish this out. So here goes!

1. writing a POV from the far, far, far distance! My preference when writing Winchesters is like, the world's closest, tightest 3rd person limited, myopic to the point that impinges on ability to tell a story. But my fave in Bleach is extremely upfront and straightforward, so that doesn't really lend anything to him, and I wouldn't want to be that close, anyway; I mean, I don't even call him by his first name. So I've chosen to not only not to close 3rd, but to do it from a different character's POV, who doesn't even know him all that well, doesn't see him often, and offers a fairly removed, self-effacing 2nd person POV. A lot of the scenes depict action from clear across a courtyard, or via hearsay and second-hand conversations and I'm loving it.

2. getting to play with language. Because they're all speaking Japanese, so "hearing" the dialogue as you write it doesn't work in the same way as in SPN. So when I read back lines, in my head I don't hear the characters saying the literal lines on the page--they're speaking Japanese, even though I certainly don't know nearly enough Japanese to actually provide myself direct translations. But it's an interesting experience, and interesting to think about like, what register of Japanese they're using when speaking to this or that character, and how to best convey that through English idioms.

3. going ham with the poetic language! Poetry is huge in Bleach (because their version of "Heaven" takes the form of Edo-era Japan, and wtf else are you going to do but write haiku all day). Chapters often open with poetic lines, swords are called to battle with poetic phrases, as is spellwork. And for all that I'm not sure why or how Soul Society has seasons (does it exist on a round planet in a spiritual solar system? Does it have oceans, climate?), they play a large role in the storytelling. (Also, the main character goes on to canonically major in English in college, and study Shakespeare, haha.)

Generally people know haiku for its 5 - 7 - 5 syllable form, but there are actually multiple forms of haiku/other syllable counts people use. The one thing that remains consistent across them, though, is the seasonable imagery. Things like snow and flowers and turning leaves, obviously, but there's a lot of other things that are seasonally "coded" in haiku and it's so much fun to weave that in, though I don't actually remember a lot of what image goes to what season and am clearly too lazy to look that up. But it's fun to be a little more elemental and woowoo than I'd ever be inclined to be in SPN (unless I were writing angels, or Amara), to suit the tenor of the series.

4. trying to convey comic/visual humor without comics/visuals. The main storyline of Bleach is pretty grim, and the traumas the characters experience or bear witness to are pretty grim. The fic I'm writing is pretty dour. But what is vital and beautiful about Bleach is its ability to do all that while also being funny and playful, and I want to be able to capture that. I guess it's similar to me pretty consistently writing depressing SPN fic, but always wanting there to be some humor in there; some ridiculousness, because that coexistence is what makes SPN SPN, and Sam and Dean Sam and Dean. For them, most of that comes from dialogue, internal or verbal; and then, to a lesser extent, trying to capture body language/stage business and expression as best you can in writing.

But Bleach is a manga/anime, so that exuberance exists in a shift in drawing style or voice, an overt exaggeration. Which is hard to do in writing without throwing the reader out of the scene entirely, or going full crack fic when you shouldn't. So it's been both fun/challenging to find ways of maybe translating that into a form that works in text.

5. and the usual dicking around with Heaven-like timey-wimey worldbuilding stuff, and getting to hang out with my best buds, the fictional characters that inhabit them.

And finally... Some No Context Bleach. My soulmate: 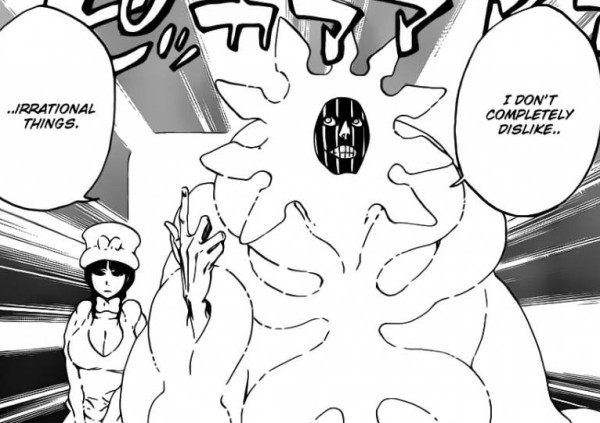