I am LATE with last week's roundup, but I had to catch up on reading! And I am this close to catching up on commenting, hahaha.

This week's themes are "the epic" and "Sam and Dean motherfucking Winchester." I know that second one is a cop-out theme, because what week is that not true of Summergen, but I feel like when you read this collection of absolute gems you'll see what I mean. Because OH MY GOD. <3333333

FIC: Falling Slow, for Lennelle
S15, Sam POV. An epic that proceeds from Castiel's probing of Sam's God wand and pulls in all directions, across universes and through everything Sam, Dean, Castiel, and Eileen can muster.

FIC: The Listeners, for

finchandsparrow
Outsider POV (or rather, insider POV). A quiet demon niggles its way into Sam, with no dog in the fight. This is how you emerge from wars intact.

FIC: Our Own Lives and Nobody Else's, for

boysinperil
Pre-series, Dean POV. For once, a road trip that is exactly that. Breathe deep and breathe easy.

ART: The Best of Both Worlds, for

dwimpala67
Heaven is: Happiness on the Winchesters' faces, painted in rich and dazzling watercolor.

FIC: In the Pines, for

theymp
S7. The very best of the Pacific Northwest, with Dean on the hunt for Sam after he goes missing. What Dean did to Amy the kitsune (and the way he lied about it) makes things complicated.

HEY. HEY HEY HEY. HAVE YOU BEEN KEEPING UP WITH

spn_summergen?? Yes?? No??? EITHER WAY, I have a MOST EXCELLENT fic you should read if you haven't already! Sure, maybe I'm biased because it's a gift for me, but what can I say. Occasionally, I have good taste. This is one of those times.

Title: Our Own Lives and Nobody Else’s
Recipient:

Summary: When Dean is halfway to hell, he and Sam hunt a half-dog, half-man, while Sam struggles with memories and instincts that are only half his own.

Dean’s in a good mood. You’re trying to be in a good enough mood, to find the balance between qualified denial and sober recognition. You’ve been at that for six months—long enough to realize that there is no good balance. Every ratio is destructive; you choose the destruction.

I've completed another series for my "return to things I read/watched in the early/mid-2000s and never finished" bingo! This time it's USA's Monk, which I was never fannish about, per se, but feels iconic of the era as a San Francisco-based cop procedural that my dad never understood why we wanted to watch, because he considered it an "old person show." I watched the first few seasons and then a smattering of odd episodes from the seasons thereafter. Having now watched all 8 seasons this summer:

1) I feel completely correct in my decision to have not kept up with the series, because the point I stopped genuinely enjoying it was the point at which I stopped the first go-round; but

2) I also feel good about having seen it through. It feels complete to me, and it was a very pleasant companion to have while housecleaning, cooking, etc.

It's so funny, though, because in the last episode the main character meets the long-lost daughter of his deceased wife (that is, her daughter from a previous relationship), and he understandably has a big emotional reaction, because it's like seeing a part of his wife he'd never known while she was alive.

I had a similar feeling, not because I was emotionally invested in the actual context but because OH NO THAT'S MY BABY GIRL ALONA TAL, JO HARVELL. <33333 😭

So Monk and I were in a very similar emotional place, even though it was for different reasons, which honestly is an experience I recommend and that alone makes me glad I saw it through to the end. FOR MY METATEXTUAL JO HARVELL MOMENT. AAH. 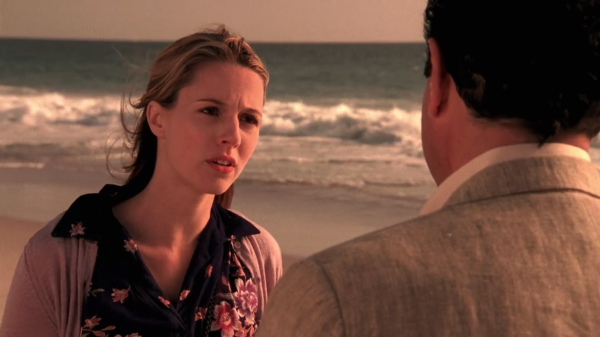